The bearable lightness of being 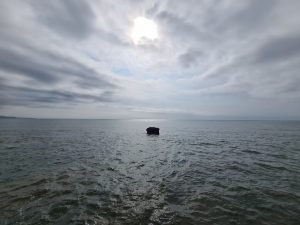 I am sitting in my living room, on a hot August day, with the window wide open to let in the morning air before the heat becomes chewy and oppressive. Stretched out on her side at my feet, my dog is softly snoring. Every minute or two, somebody walks past, and I catch snippets of conversation, or simply observe their gait. There goes a muscular young man in a tight gym vest, singing to himself, loose-limbed, swaggering with a barely-contained energy that could erupt into dance at any moment. Here comes a rangy, shirted office worker, shoulders hunched, head down, propelling himself forward with jerky, angular movements. At least, I assume he is heading off to work, with his laptop-sized backpack. There’s the occasional grumble of an engine, the clanging of a manhole cover as the wheels pass over. I revel in the gentle, tepid breeze on my face and arms. Flinch at the harsh rasp of a moped. Bella snores through it all.

A wood pigeon calls from the top of a chimney. The song of other birds filters through from the kitchen, where the window is open onto the back garden.

It is so soothing, abandoning myself to these sounds and sensations from the cocoon of my reading chair. Like choosing the corner table in a pub or restaurant, letting the sounds of music or chatter drift over me, my gaze wander over all the other drinkers or diners. Like leaning back against the cool landing wall, dangling my legs over the top stair, looking down – one of my favourite vantage points as a child. I found it calming. Still do.

Moments of aimless looking, listening, and sensing. They slow time, allowing you to drop into the pauses between the second hand on the clock. To look out from within, in the spatial sense but also from within the body.

I find it difficult, troubling to rest solitary in my skin. The knowledge that my bones, and my bones alone reside in this flesh, and that nobody can physically move in here with me, is disquieting.

Admittedly, I have a tendency to overthink these things.

I remember as a teenager, lying in bed at night and holding my thumb and index finger in front of my face. The sudden awareness of the weight and density of the air between them, and of my physical confinement, the reality of my lungs, muscles, veins, eyes, teeth, and skin, was inexplicably strange and preposterous. I couldn’t make my finger touch my thumb, the space between was gluey, gelatinous. In my confusion, it felt as if a large hand was pressing down on my chest, and I had to shut my eyes, shake my hand vigorously to dislodge the illusion.

I think this is a common awakening experience for children. My son once said something similar to me, half-laughing, half-worried as he commented on the oddity of possessing a body reflected back at him in a mirror, of staring back at his reflection and realising that was him, there, in his body.

Have you ever had one of those surreal moments when you are convinced, utterly, that you have just become weightless, taken flight, levitated off the ground and run through the air? It happens to me, sometimes, and I cannot be certain whether I dream it while sleeping or am slipping into the liminal space while awake. All I know is that some part of me, a part that is not irrational yet can scarcely be described as logical, believes that I have done it. Could do it.

Hmmm… Perhaps it is a ghost, a spectral remnant of the days when I walked with crutches in my early teens. As I remember it, my movement grew almost choreographed over time. It was a little like having wings, I suppose, swinging at speed along corridors and pavements. I am back on crutches, for now, but my progress is altogether more halting and timorous. I certainly don’t sense that I am about to take flight.

That pleasant disconnection – that feeling of hovering bird-like, albeit mere inches, centimetres even, outside the body, above the ground – returns to me now. I am not alone with my bones. Sitting here with the sounds of footsteps, pigeons, and snoring dog wafting over me, I sense a similar looseness of being, as if the essence of me has taken to the air, riding the breeze and dancing to the birdsong. As if I am inhabiting the spaces between the ticks of the clock. It is really rather lovely.