Santa Claus and the Salmon 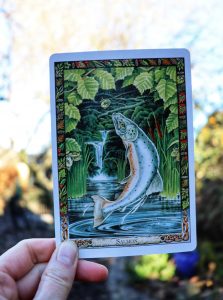 So, here we are. January 1, and Christmas, in our house at least, has been stashed back in the attic. These days, I don’t much enjoy Christmas. Hardly a bauble-shattering revelation – and tempered, of course, by the acknowledgement that the festive period is a truly difficult time of year for countless people, putting my own mild discomfort into perspective. Festive spirit seems to have eluded more of us than usual this year, which is hardly surprising, with everything that’s going on in the world.

I expected to feel pure relief as I packed away our affectionately-named ‘Crap 70s Yellow Tree’ (it cost a tenner from Argos but looks cheaper than that), yet I was actually a little wistful. Perhaps this was a ghost of Christmasses long-past, when the dismantling of what was then the most magical time of the year caused genuine dismay. We had a silver tinsel tree, back in the actual 1970s. Oh, how it filled me with pure joy! It was the prettiest, sparkliest tree in the world, bedecked with starlight and jewels.

And then, of course, there was the thrill of Santa Claus! Do you remember how you felt when you found out he isn’t real? I certainly remember being told; I unwittingly forced my dad’s hand after exclaiming how his handwriting was exactly the same as the writing on the note that Santa left pinned to my present-stuffed Wombles pillowcase… I think I just fell silent, at the time. I suppose it was similar to the disappointment when the fairy lights won’t twinkle, because one bulb in the string has broken – your absolute favourite-coloured bulb, too! Was that the first of my magical beliefs to be snuffed out? Do we suddenly cast off the cosy cloak of magic, or does it slip softly and imperceptibly from our shoulders as our sense of mystery fades, and we mature towards the more practical complexities of adulthood…

When you remember believing in Father Christmas, does a sad little half-smile form on your lips? Do you miss the magic? Of course, as adults we’re kind of over the revelation that Santa is a figment of the imagination, and we know too that his iconic red suit with its fluffy white trim actually makes him a brand ambassador for Coca-Cola. There is a part of me that questions whether Santa Claus is the kindest way to enchant children at Christmas time. Could we instead instil a magic that will enthrall them for a lifetime, rather than become a memory of a feeling, locked away in the toy box in the attic along with the fairy stories and the soft toys who held delightful afternoon tea parties? And wouldn’t it be lovely if, from the earliest age, Christmas could be all about giving, not receiving?

Whatever the arguments for and against Santa, I confess that, for many years – well into adulthood – a part of me continued craving magic and enchantment and was reluctant to countenance the possibility that magic had simply floated away as my maturing thought patterns became too rigid to contain it.

Well, let me boldly say this: I believe more in magic now than I have since Santa last left a stash of toys in that Wombles pillowcase draped at the end of my bed. Not magic of the illusory kind, but the magic of a mind that is open to enchantment. And that is all because of a fish.

In Druid tradition, the salmon is revered as sacred. Often with great difficulty, the salmon returns to the place of its spawning in order to mate. The teaching in this is that we too need to journey back in our minds to our beginnings, our childhood, to be reborn, and to discover anew that attitude of innocence as a balance to the practicality and logic that being an adult requires of us.

For anyone who had a troubled childhood (and mine had its troubled periods), revisiting that time is not always a comfortable experience. In my case at least, I had fallen into the habit of viewing my formative years through a fogged, cracked lens and, for a time, forgot all the little things that made me quietly, yet profoundly happy.

When I began to metaphorically follow the salmon’s course back to my childhood, I wasn’t aware that I was questing for lost magic, and I was mildly surprised at how eagerly I seized upon that sense of wonder. I realised that my young self, who went hunting for fairies beneath the snow-capped stones in the woods – a little frustrated that they did not reveal themselves but understanding that this was because they were timid, and terrified of me – was merely following our innate, unfettered, wild wisdom. That curiosity and exploration, that sense of wonder, could, and indeed should, be embraced throughout our lives. Of course a child can believe that anything, pretty much, is possible because their brain is still developing, but the part of us that shone with mystery can be reilluminated in adulthood, as a simple antidote to the anxieties and burdens of our grown-up lives.

Thanks in part to learning from the leaping salmon’s journey, lately I am seeing many things with a renewed sense of wonder. I suspect this is aided by the natural loosening of threads that can occur in midlife. There is space for simple delight to spill into the gaps that open in the weave, and I find myself thrilled by the most ordinary of things: the silver-tinged, powdery bloom on a dead leaf, the riotous kingdoms of moss that colonise the branches of trees, the astonishing blueness of a late autumn sky, the sensation of warm, soapy water sloshing against my fingers in the washing-up bowl, even the pink of my dog’s tongue protruding from her mouth as she snores on the sofa. All these little wonders begin to weave their own fabric, a new cloak of magic that is ours to keep.

Following the salmon’s course back upriver, only to meet Santa cresting the midnight heavens with his flying reindeer… Well, not quite: but what the journey has taught me is that this earthbound enchantment is everywhere. We just need the space to pause, however fleetingly, and look. There may or, more likely, may not be fairies beneath the big stones – but the rock itself glitters when the light falls just so, and the cool roughness of its surface sends shivers through your fingers. Millennia, perhaps longer, of energy, making your nerve-ends dance.

For the start of another year, I’d like to share with you a tiny and beautiful ritual that I was taught. On opening the window or door, first thing in the morning, say ‘Hello’. That’s it. It is a form of spell-casting, I promise! Once the word has been spoken, a latch magically unfastens. It’s not quite like stumbling into Narnia at the back of the wardrobe, but I challenge you not to smile broadly, as if you have just bumped into a dear friend on the street. Hello birds! Hello chimney pots! Hello weeds! Trees, slugs, smell of wet soil… hello! The most accurate and not especially magical metaphor that I can find to describe it is this: you know those funny wire spectacles that the optician props on the end of your nose during an eye examination? (I always start giggling when he puts them on me, I can’t help it!) Well, as you’re sitting there, enunciating the letters on the chart, thinking that the E and the T are adequately nice and sharp, the optician slips just one more lens in and – oh! Gosh! That’s much clearer now! Turns out the letters weren’t nearly as solid and bold as they could have been. With this added lens, you could almost touch them. That is how it felt for me, when I first said hello to the wood pigeons, and the magnolia tree, and the morning breeze…

I’d like to thank you for reading this little blog of mine, and to wish you a magical new year. I wish you amazement in the smallest, simplest things: in the striking of a flame, the chirruping of a bird, the reflection of the sky in a single drop of water. In the dimpled white moon on a clear night. I wish you comfort and joy whenever and wherever they offer themselves up to you. I wish you much enchantment of the everyday kind… 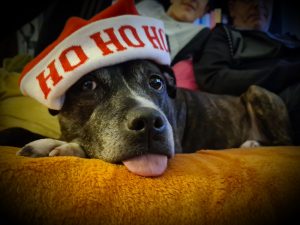